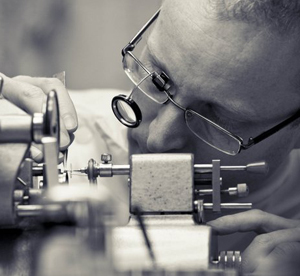 Not three years have passed since the death of Dr. George Daniels CBE, DSc, FBHI, FSA, a man who devoted his working life to the development of the modern mechanical English Watch. Mr Daniels recognised the need for a watch that could compete with a changing market giving high standards of timekeeping and longevity of service.

The Co-Axial Escapement was his invention, not only did its making require the greatest of skill, but it was an analysis of hundreds of years of horology’s greatest escapements. The task of getting the Swiss watch industry to mass produce his prototype “against all odds” would have made many crumble.

So what of the future? With George’s bequest of his entire workshop contents, Roger Smith continues to hand make watches on the Isle of Man, making improvements and continuing the high standard his master instilled. Many of the South London Branch fondly remembers a visit to the Daniels Riversdale studio. It was George’s wish that an Educational Trust be set up from his estate and by actively supporting those wishing to make a career from horology in the UK, whether employed or self-employed, that the trust fund will ensure that future generations are given the opportunity to develop their horological skills.