The final lecture of 2015 will be given by our own Philip Whyte. Philip is this year’s Master of the Worshipful Company of Clockmakers and a Director of Charles Frodsham & Co. He is also a member of the George Daniels Trust Advisory committee and a Vice President of the BHI.

Philip believes you need to physically handle as many clocks and watches as possible in order to fully appreciate what top makers really had achieved.

This lecture on Engine Turning, explores mankind’s ingenuity in creating machines that could, both replicate and repeat, a fixed pattern on an object.

The talk embraces the early days of these mechanisms and continues right up until the typical Rotary and Straight-line machines, which were produced in Birmingham as recently as 50 years ago.

The huge range of objects that were Engine Turned will be explored, and the reasons for doing so, which surprisingly were not always done from a decorative standpoint.

The lecture will show how Engine Turning was used to great advantage by clock and watchmakers, both in England and abroad.

How, although the overall Engine Turning trade has declined, many contemporary watchmakers are now incorporating it into their products

In addition, the principle of how these machines work, and how one might use them from a practical viewpoint, will be covered. Tool sharpening and tool angles details will be shown for those of a ‘hands-on’ nature in the audience, and design considerations for those who might be contemplating making something that could be Engine Turned.

AGM followed by a talk from our own Jack Hobson

This meeting will be a two stage event. Firstly there will be the AGM where you have the opportunity to find out the current state of branch affairs. There will be reports from the Chairman and Treasurer followed by any questions, and the election of the committee for the coming year.

Please remember to vote at the AGM you must be a member of both our Branch and the BHI at Upton Hall.

Now for our Star Turn!!

Why are some materials strong and others weak? What is special about iron? What is the best heat treatment for a particular steel?
The material science behind these questions is complicated, however a good level of understanding is easy to achieve. Some simple conclusions and insights will be presented which, if recounted with confidence, will convince others (less prepared) of your expertise.

Jack Hobson is a dilettante of many disciplines including mechanical engineering, metallurgy,   blade-smithing (and recently horology). True to his name, he is Jack of all trades…

Conservation of the Pyke Organ Clock for Temple Newsam

Our speaker this month is Malcolm Archer FBHI who since 2007 has been working as a self-employed clockmaker based near Chichester.

He is also employed as one of the Associate Tutors on the Clocks programme at West Dean College, providing tutoring as well as specialised training in small work such as carriage clocks.

Following his initial horological training at Hackney College in 1998 Malcolm went on to complete a Postgraduate Diploma in Conservation/ Restoration of Antique Clocks at West Dean College obtaining a pass with distinction.
The Pyke Clock Project headed up by Malcolm is the result of a collaboration between Leeds Temple Newsam House and West Dean College.

George Pyke, a clockmaker and organ builder, working in eighteenth century London. Along with his father John Pyke, George was an associate of the eminent English clockmaker Charles Clay.

Transported to West Dean in early February 2014, the clock, circa 1765, consists of a near eight-foot-high ebonised case containing the clock movement, automaton dial and barrel organ with pipes in wood and metal. The music is played from the large rotating wooden barrel with several thousand individual pins and bridges, each activating a note.

Restoration involved work on the clock movement, automaton dial and barrel organ mechanism together with the ebonised case.

Now working and back at Temple Newsam tonight’s talk is the story of the conservation of this most remarkable clock.

For our August meeting we welcome Ashley Strachan to talk to us about Japanese clocks and seasonal hours.
Ashley is secretary of the East of Scotland Branch and a Board Member of the BHI responsible for Finance and Membership development. In March 2014 he was appointed a trustee of the BHI Museum Trust.

Ashley’s interest in Japanese clocks was kindled back in 2011 when he visited the Matsumoto Clock Museum during his first holiday in Japan.
It was not until 1873 Japan adopted International Time. Prior to this a system of Temporal Time was used dividing the day into twelve segments, six periods of daylight and six periods of darkness. Any mechanical timepiece required some method of varying the length of the day and night periods according to the season. This led to the design of some complex and interesting clocks.
In case you were thinking the Temporal Time system is now obsolete Ashley has a Japanese temporal time clock on his iPhone!!
For those who like to do their homework Ashley has recently had two articles published in the HJ one in September 2014 – Japanese Clocks and in January 2015 – Japanese Ten Thousand Year Clock. 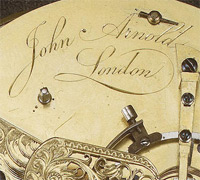 John Arnold – From Watch to Chronometer

Paul, a Livery member of the Worshipful Company of Clockmakers, graduated from Hackney Technical College.

Paul is a long standing restorer of nineteenth century Swiss musical boxes having repaired hundreds of instruments over the last forty years or so.

Paul has previously written articles for and given lectures to the Antiquarian Horological Society.

This talk on the life and inventions of John Arnold is one not to be missed.

At a recent sale at Bonhams a John Arnold Chronometer sold for £27,500!!

Please remember we are back at our usual Village Hall location.

The History of Metals and its Influence on Clock Development

How much do we know about the metals we use everyday

Chris will start with the history of how Iron, Steel, Zinc and Brass were commercially produced over the centuries. Starting in 1386 the supposed date of the Salisbury Cathedral Clock to 1900 when social and economic conditions determined a downturn in clock production. With the metallurgical history established Chris will then go on to chart the development of clock production identifying marker points in horology that can be attributed to the metals available. Domestic as well as Turret Clocks will be considered.

Bloom out of the furnace

Looking to the future Chris will speculate on the discoveries that may be made using the bewildering array of tools and techniques available today.

Chris, a Chartered Electronics Engineer is Chairman of the Dorset Clock Society and a prolific author. His books “The Turret Clock Keeper’s Handbook” and “Big Ben – The Great Clock and the Bells at the Palace of Westminster” are seen as the definitive works on these subjects. A regular contributor to the HJ Chris has provided both articles and authoritative book reviews. Risking the attention of every Health & Safety Officer in the land the November 2013 issue covered working with molten lead in a practical and safe way for the clock enthusiast.

Aged 11 Chris started to take alarm clocks apart and by age 13 had learnt to put them back together again! At the age of 19 he worked on his first Turret Clock and has been fascinated by horology ever since.

This is a talk not to be missed! 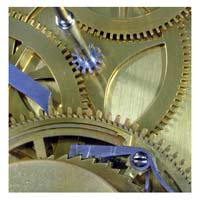 Find out what has been going on at the West Dean College Horology Workshops in a series of presentations by this year’s students.

An intriguing title for what promises to be a talk to remember.

John Downie who is a member of the Sussex Branch of the BHI is a retired university lecturer with a keen interest in the practical use of computers in clockmaking.

John will be describing the research and computer modelling he did in order to help a friend build a functioning model of the famous 14th Century Salisbury Cathedral Clock.

With a desire to be able to manufacture complex items in his workshop John has built his own CNC machine using a scrapped computer controlled PCB drilling machine together with home brewed electronics and software.

Subsequently he has gone on to develop computer models of mechanical regulator clock escapements and using programs such as Algodoo and Rhino 3D and a home brewed mill has gone on to put some of them into practice.

John is not entirely computer based and enjoys working alongside other Sussex based horologists fine tuning his hand skills.

Anyone who was on the visit to the Frodshams workshop will remember how impressive the computer aided design facilities were.

Maybe John will inspire us to see how the computer can be put to good use in our own more humble workshops!!

The meeting on the 5th of February will be back in our usual White Hart Barn Godstone and we are delighted to welcome the renowned horologist Mr Owen Gilchrist from the Bristol branch. Owen will be traveling complete with bench and his family to demonstrate, under the bright lights of a video projector. Owen will demonstrate assembly of the Smiths iconic calibre 1215 watch. This was one of two manufacturer’s watches that Sir Edmund Hillary wore to the summit of Everest.

Owen who studied at the Manchester BHI College alongside Roger Smith and others, will explain to us as he gives his demonstration, the history of this British timepiece. Conceived at the time of the Second World War and developed after it, the watch remained in production until the 1970s. Owen will bring an example of the early watch.

Owen will have watches for demonstration which are for sale and a number of other items, including books that would be of interest to the discerning horologist so come prepared.